UPDATE: Jody is now official the Guinness World Records Title Holder, for the Longest distance pushing a lawn mower in 24 hours. Congratulations to Jody and his support network. 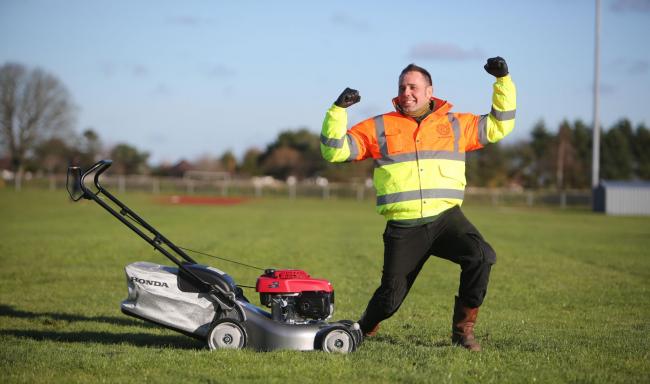 Jody Fassinger of Hants and Dorset Gardening Services has claimed to have set a new record by pushing a lawnmower 92.7km (57.6 miles) in 24 hours at the kings Park Athletics Centre, Bournemouth.

Jody more than doubled his original goal of reaching 25 miles and his effort was awarded by £727 donations going to Julia’s House Children’s Hospice.

The Honda lawnmower which was supplied by Christchurch Powr Tools was running on Aspen 4, to ensure there were no issues with the machine which could hold Jody back. The benefit of less smelly and less harmful emissions from the lawnmower will have also made the 24 hours much more pleasant.

After 24 hours of eating and drinking on the go Jody said “I’m happy but my legs are killing me. They’re really achy.” The lawnmower was happy to keep going though! It was calculated approx 15 litres of Aspen was used throughout the entire day which gives a a fantastic fuel consumption of .625 litres per hour.